If you joined the Bermuda Police Force during or after 1966  you will no doubt soon be celebrating the 50th Anniversary of your appointment as a Bermuda police officer.

The 1960's saw a rapid expansion of the Force with concerted efforts to recruit new officers both locally and abroad.  1963 had been a pivotal year with the establishment of our own Police Training School at Prospect which allowed local recruits to receive the same standard of basic training as had previously been given to untrained officers recruited from the UK who were sent to the Police Training School at Mill Meece in Staffordshire for a 3 month training course prior to arriving on Island.  The new local training school could be used to train new recruits from Bermuda and from abroad, and in 1966 -  50 years ago - we had our first group of Bajan recruits arrive on Island.  By our count we had a total of 39 officers join the Police Force in 1966,  and two events have been held in recent months  to mark their anniversary.

It has been 50 years since the officers listed below first joined the Bermuda Police Force, as it was known then.  Some were new recruits with no previous police experience, hired either locally, from the U.K. or from Barbados; some were experienced officers recruited in the U.K, and one was an experienced dog handler brought in from England to take over the Police Dog Section. 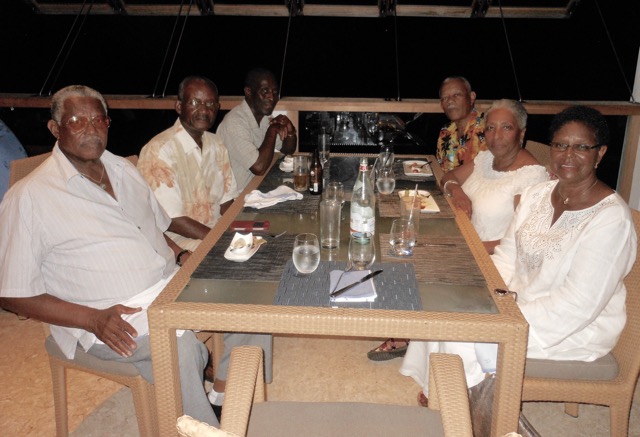 We had already reported on the four Bajans who got together over Cup Match to celebrate their 50th Anniverary.  Orson Daisley and his wife Madeline came up from Barbados for the occasion, Ralph Sealy and his wife Jennifer came from the U.S. while John McConnie and Vendal Bridgeman didn't have far to travel as they have both settled here.  Details of their get together, and what they are doing these days were reported in our Interesting Articles  at http://expobermuda.com/index.php/articles/508-bajans-celebrate-50th-anniversary

And  a larger contingent of 1966 graduates gathered together on Saturday 10th September at Ascots Restaurant to celebrate that significant milestone. They are all living on Island with one exception, an overseas surprise guest in Tony Timothy who was also one of the first group of Bajans from 1966.  By all accounts it was a truly memorable evening giving those present the opportunity to reminisce about their time with the police. Dave Cook brought greetings from overseas members including Les Brown, Pat McBride & John 'Coco' Eve. He also noted that out of the 15 who arrived on 5th Sept 1966,  at least three had passed on, that we knew of. 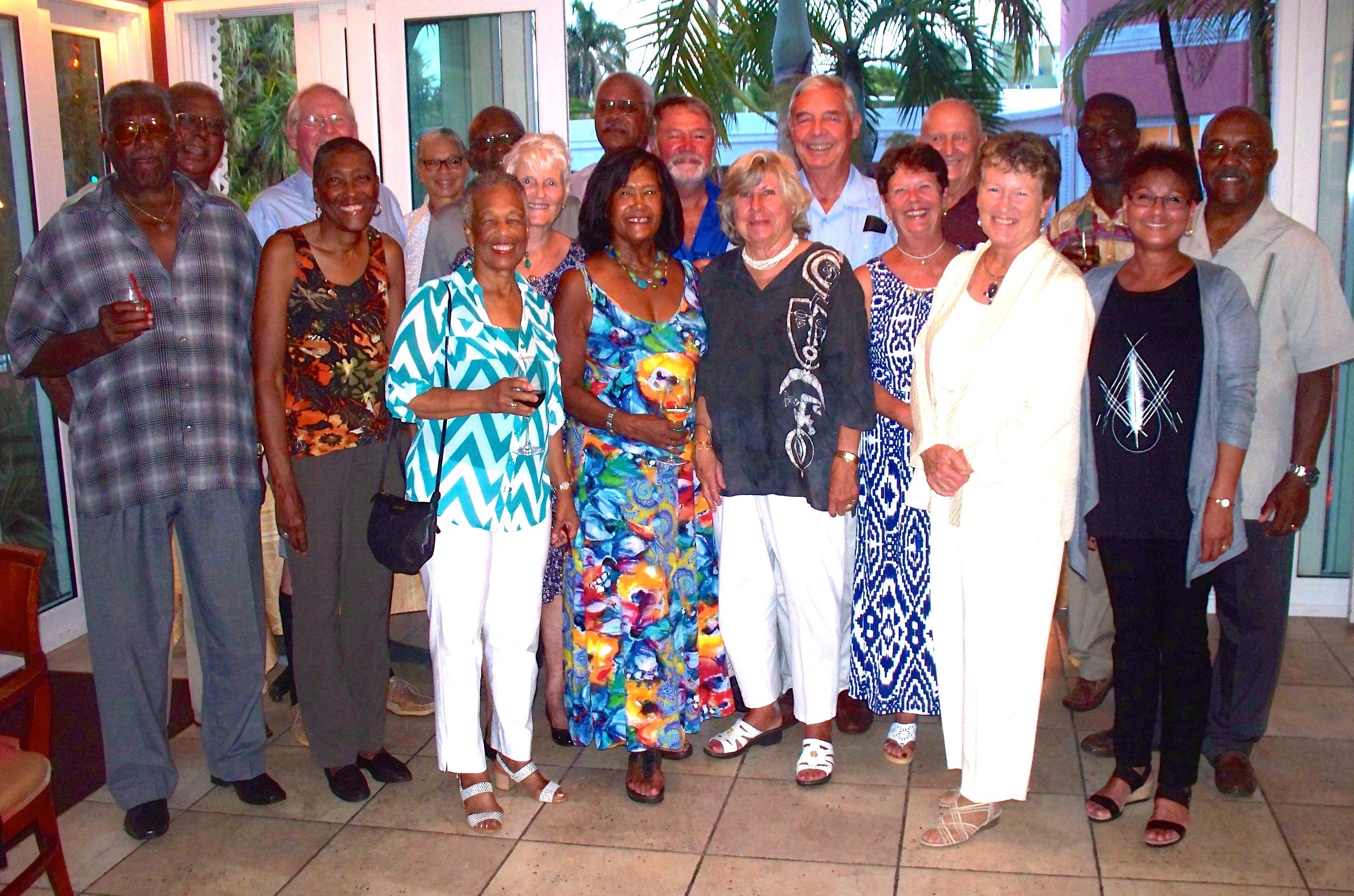 We would like to think that the vast majority of those of us who have survived for 50 years after starting their police careers here, can look back with some fond memories of their days in blue.  We realize that most of those of our former colleagues who now live abroad can't make it back to Bermuda, but it would be great to hear from you.  For those of you now living abroad we invite you to write to us and let us know what you did after leaving the Island, how you are doing these days, where you are located, and how life is treating you.  Just imagine that you have been able to return to Bermuda and you are sitting at one of these anniversary celebrations chatting with old friends about the good old days.  If you look back 50 years what would you like to  say to your old colleagues, and what sticks in your memory about the people you joined with, and the people you worked with.

In some cases we have in depth articles about a few of the 1996 recruits. For example we have 'Then and Now' articles about Orson Daisley, Ralph Sealy, John "Coco" Eve, Davie Kerr and Ray Sousa.   For those not familiar with our website, if you go to the Home page you will see a 'Search' box in the top right corner  which you can use to search through our files for mention of anyone who's name you enter into the box.   You will find that the vast majority of the officers who joined in 1966 are mentioned somewhere on the website and in some cases they are mentioned numerous times.  If you are one of those who's name does not appear on our site we would encourage you to write to us at This email address is being protected from spambots. You need JavaScript enabled to view it. and let us know where you are these days, what you are doing, and if possible send us a recent photo of yourself, perhaps with family.

The website is here for your use and enjoyment.

Here is our list of police officers who joined during 1966 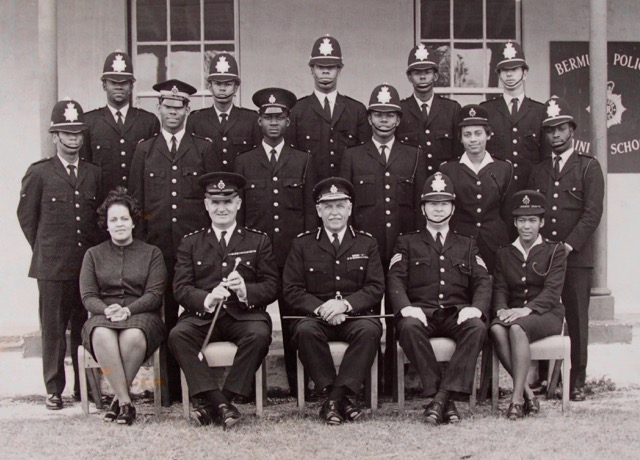 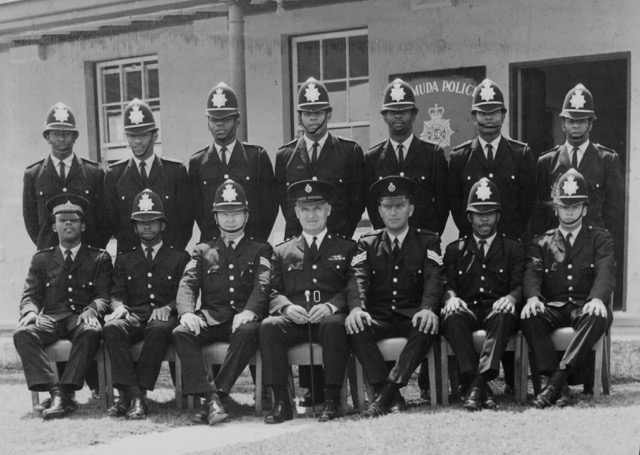 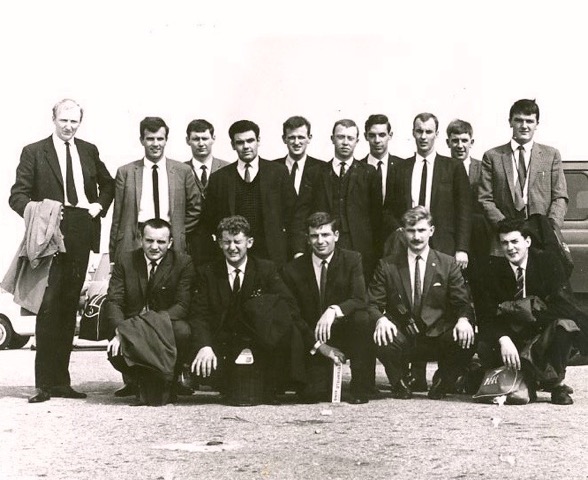 (l-r)  Top Row - Bob Roberts, John Graham, Les Brown, Brian Kent, John "Coco" Eve, Les "Bloodnut"
Tomlinson, Dennis Brookes, Alan Keagle, Alan White, Dave "Big Joe" Needham
Bottom Row - Pat McBride, Dave "Cookie" Cook, Ian Mitchell, Fred Church, and Vic Richmond
14th November
Barrie Mancell
Garald Ardis
George Rushe
Malcolm Smith
David "Bones" Fraser
David "Davie" Kerr
1st December
Bryant Richards
Fred Beach
Unfortunately,  it appears that the Police photographers usually took only photos of the Basic Training Courses, but not of Localisation Courses, Refresher Courses, Driving Courses etc.  We are in the process of copying all of the Basic Training School photos,  and we are finding that a few former officers have photos taken of courses they attended.  If you have one of a course you attended and it is not on our website we would appreciate it if you would send us a copy in the highest quality you can scan in JPEG format, and we will publish it on the Training School Photos column.
Sadly, there are considerably more than 3 of the 1966 recruits who are no longer with us.  To the best of our knowledge  the following have passed away:-
Fred Beach, June Dickenson, David "Bones" Fraser, Harry Garth, Robert "Pudsey" Hay, John Instone, Alan Keagle, Ian Mitchell, Vic Richmond, and George Rushe.
We keep a list of Police Officers  who are now deceased which you can find at http://expobermuda.com/index.php/deceased  Please advise us if you know of anyone who had died and is not on the list.
1967 - 2017

And what about the 50th Anniversary coming up in 2017? We would like to think that your group will be pro-active and start planning for your own "Golden" Anniversary.Here is a list of all the officers who joined in 1967.

Davie Kerr 6 years
Roger, for some reason the names attached to your first training Course above have also been attached to the second one, which is of an entirely different course! To the best of my recollection, the names for Pic 2 should be Back from L:- Hoskins Caddle, Clevie Foggo, Cosbert Cumberbatch, Bryant Richards, Carl Beckles, Clay Carter, Fred Beach.Front from L:- Larry Smith, Malcolm Hinds, Sgt John Cafferkey, C/I Roy Chandler, Sgt Mike Kelly, Reese Bartley, Stan Hill.Editors note - Thanks for pointing this out Davie. Corrections made.