When posting this photograph we said there were some outstanding players on this team who should be very familiar to anyone who was following Bermuda football at that time.  We wanted to know which team it was?  Who did they play against? When and where did the match take place?  Who was responsible for arranging the match? How many people in this photo could you identify and what was their connection with the Bermuda Police? And finally,  what was the score?

We have to give Davie Kerr full marks for answering most of our questions, especially naming all of the players.  This was a Bermuda Select Squad who played against English First Division team, Coventry City Football Club, in late Spring of 1967.  For the first time since its inception our Police Recreation Club organized and sponsored this visit by one of England's finest teams where the chairman of Coventry F.C.. Mr. Derrick Robins, happened to be a cousin of our then Commissioner of Police, George Robins.

Our Police team had some great players at that time and three were selected to play along with some of the Island's best players as listed below.  John Barnett was team manager, former policeman Alan Harker was coach, and the three police players were Jack Crane (Captain), Arthur Bean who was a regular member of the national squad for many years, and Alan Keagle as goalkeeper. Also playing in the team was our garage mechanic, Ben Swan. A full report of the match was published in the Summer 1967 edition of the Police Magazine in which in was reported that the Bermuda team had hoped to end to Coventry F.C's string of 30 or so games without defeat prior to their arrival on Island.  The final score was a "rather shattering 8-0 win for Coventry". For a full report on this visit see the article below. 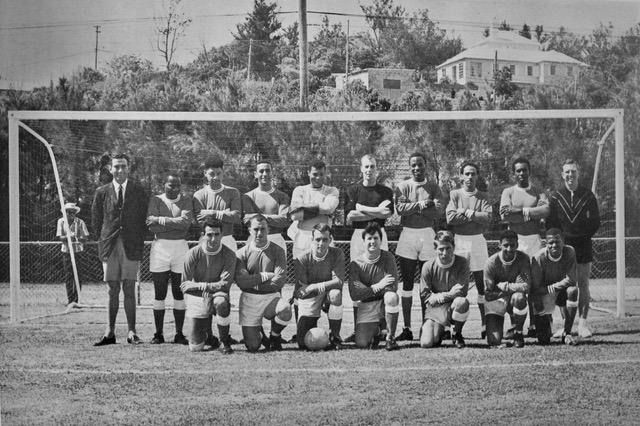 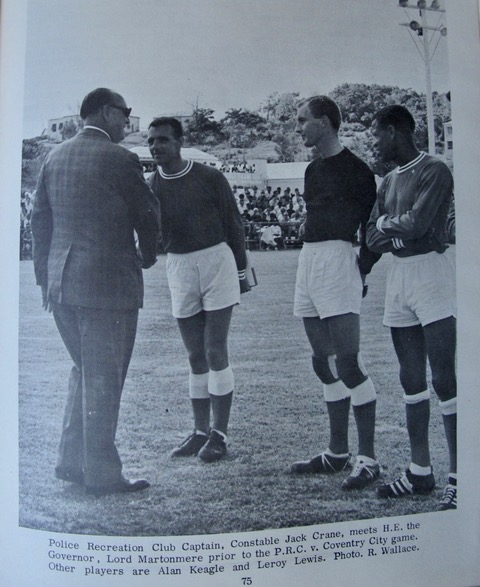 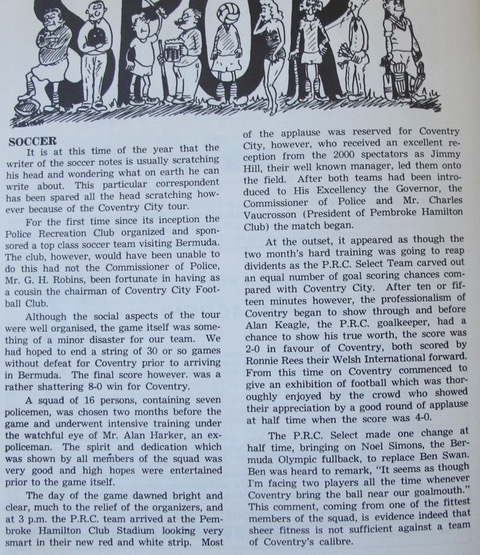 Extracts from the Summer 1967 edition of the Police Magazine

"All this talk of Coventry City Football team in Bermuda (Who, When & Where and John Barnett’s Then and Now) reminded me that I had the attached photo and thought you might like to see it. I believe Noel Cantwell was the manager during the visit

Editors note  - This must have been around the time that Coventry was changing managers because according to the article in the Police Magazine (Summer edition 1967)  Jimmy Hill came on as substitute late in the game, and his teammates tried everything to set him up to score a goal!

In the centre of the front row is George Robins' cousin Derrick Robins, as mentioned elsewhere the then Chairman of Coventry City football Club.

I couldn’t play football for toffy but, like most teams visiting Bermuda, the players and manager enjoyed a drink, and that’s a game I could play so I spent quite a lot of time with the team in the PRC and elsewhere

I can vaguely remember several valuable members of the team being taken to the airport in a police car which had a slight collision on the way there about which I will make no further comment!  Fortunately,  they all arrived safely at their destination, and oh yes, the car was repaired before the said driver went off duty!"

Editors note -  When we first published this photo from Mike we believed that it was the Coventry City FC team taken on the Police Field Prospect during their visit to Bermuda in in 1967. We knew that the gentleman kneeling with the ball was Derrick Robins, cousin of then COP George Robins, and we enquired if we had any Coventry City FC fans who would like to try naming the Coventry players and staff. We had no responses from our ExPo members but we can now identify all of these players and officials from Coventry City FC thanks to their official historian Jim Brown.   We thought this would be quite straightforward so we were bowled over when Jim advised us that all was not quite what it seemed as you can read below! 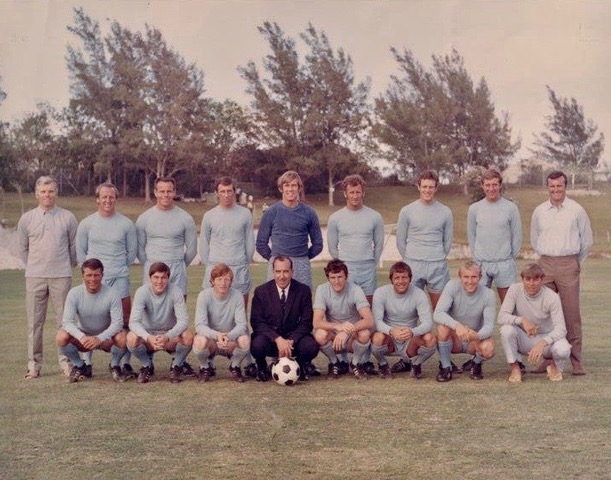 For those of you who follow our "Who, When and Where" column you may have already read what we thought were all of the answers to our series of questions except for the names of the Coventry players.

I'm sure we have lots of Coventry City fans in Bermuda but no-one from our ExPo group had tackled trying to name their players in the photo of the Coventry team kindly submitted to us by Mike Caulkett. Mike had made a brief comment to the effect that he believed Noel Cantwell was the Coventry manager during the tour even though our Police Magazine specifically mentioned that Jimmy Hill, their legendary manager, came on as a substitute late in the game at which time his players tried everything to set him up to score a goal. Great manager - not such a great striker!

Before moving onto our next "Who, When and Where" photo I decided to write to Coventry City FC to ask if anyone might assist us in identifying the members of the Coventry team.

It was a lovely surprise, to receive the following information and documents from Jim Brown, their Official Historian, who went above and beyond the call of duty in answering my enquiry. However,  it was a complete surprise to hear from Jim  that the photo of the Coventry City FC team provided to us by Mike Caulkett was NOT the team that visited Bermuda in 1967, but the Coventry team that re-visited the Island 2 years later, in 1969, by which time Noel Cantwell had replaced Jimmy Hill as their manager.

Mike was correct with regard to his photo being of Coventry City FC, and in all fairness it was taken at our Police Sports Field field, and he did say he thought Noel Cantwell was the Team Manager.

It is noteworthy that Commissioner George Robins' cousin, Derrick Robins was still Chairman of the Board for this second visit in 1969.

Jim Brown would be very interested in obtaining any programme or team sheets for the match against Somerset which took place on 4th June 1969. If you happen to know of any Coventry fans here on Island, or officials from Somerset Trojans who might be able to assist please let us know.

Once again, many thanks to Jim for all the extra information he has provided to confirm the "Who" the "When" and the "Where" in this article.

I've now had a proper chance to read the article on your website and study the picture.

The facts about the game in 1967 are absolutely correct from my point of view. The game was played on 18th June 1967, one of several games Coventry played in the Caribbean on a tour celebrating winning the Second Division championship in May.

The Coventry team picture was not taken then, but two years later when Coventry returned to the island. Noel Cantwell had replaced Jimmy Hill as manager in October 1967 and on 4th June 1969 they played a friendly game against Somerset which ended 1-1.

I am attaching a scan of the complete programme for the 1967 game which may be of interest. I would be very interested in seeing any produced for the 1969 game as I have never seen a programme or team sheet. 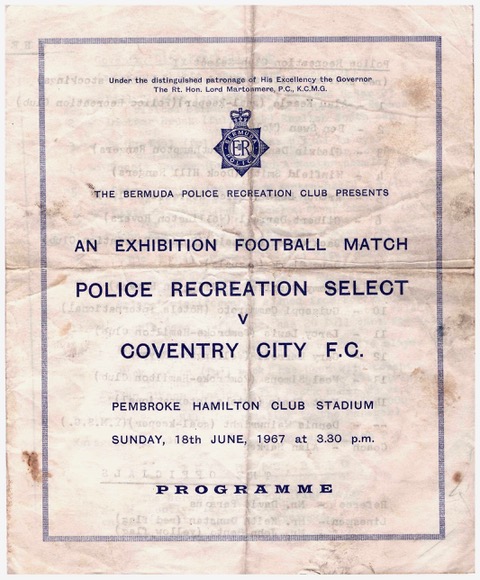 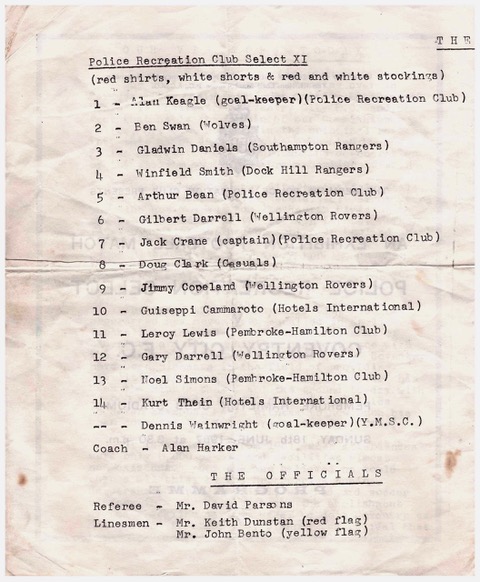 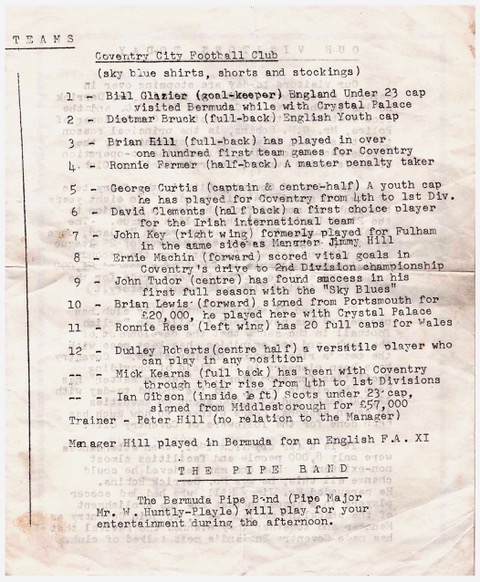 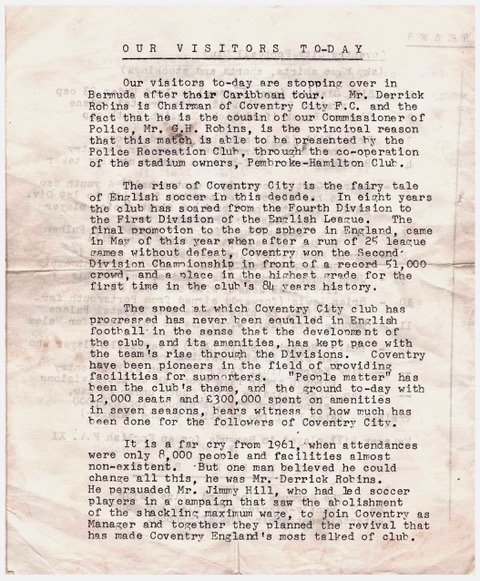 Davie Kerr 2 years 10 months
If (as is stated) this pic was taken in '69, it wouldn't be at the Police Field as it didn't open until '71: judging by the background I'd say it's on the old National Stadium pitch.Editors note - Agreed

Davie Kerr 5 years
I believe CoP Robins and Coventry City's chairman were related in some way, but I don't know whether it was by birth or marriage.And I'd have to guess that the photo itself, as you got it from an old Police magazine, would have been taken by someone from SOCO (or CRO as I think it was then). I believe a bloke called Ray Hodges was the main photographer back then, but he may have left before that pic was taken.Editors note - You are on the right track Davie. Will publish the background to this photo this weekend if possible.

terry 5 years
Just a question.Who supplied this photo shown?Editors note - Good question Terry. I found it in an old copy of the Police Magazine and plan to also post the accompanying article discussing the match in which this team was involved. Will try to do so this week.

Davie Kerr 5 years
I know most of the answers as I was indirectly involved with this, but I'll hang off a while until there's been some more feedback.

mike cherry 5 years
No idea about when where or why, but some familiar faces include John Barnett, Ben Swan, Arthur Bean, Alan Keagle, Dennis Wainwright, Alan Harker, Jim Lyons, Jack Crane, Leroy Lewis.Editors note - Correct on all except Jim Lyons who is not in the photo.