Men From the East

We recently received this group photo from former P.C. Ian Kittle who has written an excellent article for our "Then and Now" column which you can view at http://expobermuda.com/index.php/tan/658-ian-kittle

Ian sent us a great selection of great photos, in fact too many for us to include them all in his article, so we decided to post this one in our "Who, Where and When" column for two reasons. The first is that we want to include as many photos as possible on our ExPo website for historic reasons, and secondly we want to test your collective memories to see if between us we can identify everyone in this photograph.

We knew for certain that anyone viewing it would immediately know where it was taken (outside the St. George Police Club) , and you will of course see Ian Kittle in there. But we wanted to know if you could recognize all the others and also confirm when it was taken.  We have heard from John Headey that he left the Island in 1976, and he believes this photo was taken in the year he left, so unless we hear otherwise we will settle on 1976.

As of 22nd July 2018 we appear to have successfully identified  everyone unless we've made any mistakes!

We also posted another of Ian's group photos in our "Who, Where and When" column this last week titled "A Dangerous Group" which you can view at http://expobermuda.com/index.php/who-when-where/679-a-dangerous-group

Now that we also have an ExPo Facebook page we have posted both of these photos on it in hopes that it will reach a wider audience of our Bermuda Ex-Police Officers.  You can view our Facebook page at https://www.facebook.com/BDAExPolice/

Just one extra note if you are a former member of the Bermuda Police we are always interested in receiving old photos and in hearing from our old colleagues so please feel free to put pen to paper or fingers to keyboard and get in touch with us. 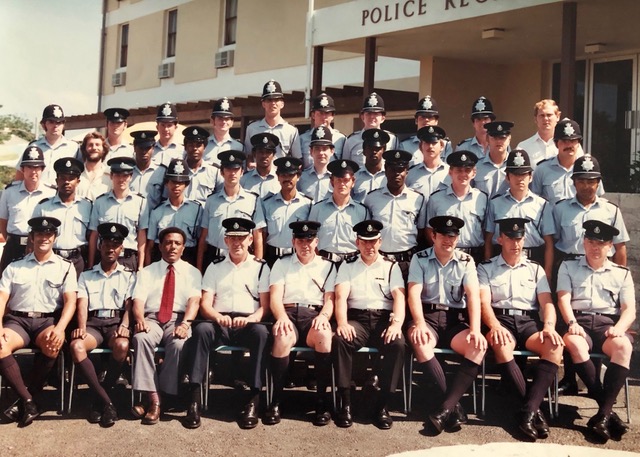 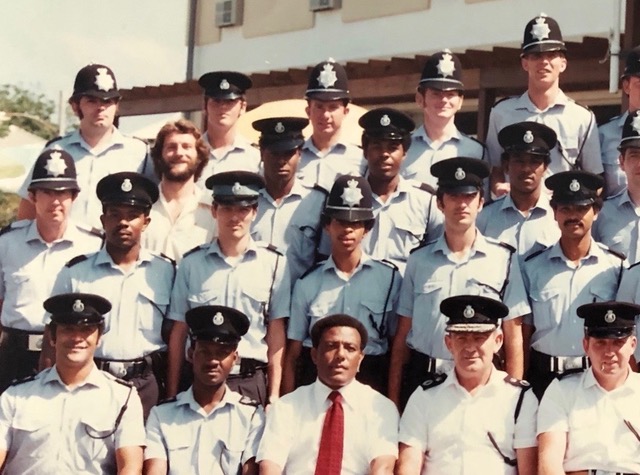 Back then we did not have cellphones. We had cells.We did not have photo copy equipment.Seniority list/s were not to be duplicated.Apparently "Coops List" must be worth $1 million to ……..Memories.Editors note - Quite frankly, I don't know what we would have done without "Coops List" which was painstakingly researched and written some years ago by Dave Cooper. It's one of the most valuable documents in our archives.

John Headey 4 years 6 months
I can confirm that is Frank Rogers.Editors note - Many thanks John. Frank Rogers it is.

John Headey 4 years 6 months
I left Bermuda in November 1976 and from memory this shot was taken the same year.Editors note - Many thanks John. That nails it down. Hope you are surviving the hot dry weather in the UK.

terry 4 years 6 months
Clancy Charles next to (between) Peter and Earl.

terry 4 years 6 months
Vendon Archer next to GordonEditors note - Thanks Terry, Moby Pett sent me an email confirming the same name so I had made the change.

terry 4 years 6 months
After Moby's post I am more confused.Editors note - No problem Terry. This same photo of Men from the East was accidentally included in the article referred to by Moby instead of the photo of a ship named "Tamaroa". As soon as I received Moby's message I made the correction. I note that Moby didn't have all the names of the guys on the Eastern Division photo, but you wrote earlier that you "got 'em all" so now is your time to shine. I would be delighted if you would fill in all the names of those in the photo, I look forward to hearing from you.