We found this photo in our files and wondered if we could collectively identify everyone it in, and work out when and why it was taken.  We have to thank Phil Taylor for being absoutely spot on with all their names  Sadly there are 16 officers in the photo who are no longer with us and their names have been marked with asterisks.

As for when and why it was taken;  we are quite sure it was taken in late 1981, probably just after the handover of Commissioner of Police from L.M. "Nobby" Clark to Frederick "Penny" Bean.  Nobby" officially retired as of 21st October that year, and of course, it was taken on the PRC patio overlooking the Police Field. So this would be the first photo of our senior officers following the handover to Commissioner Bean. 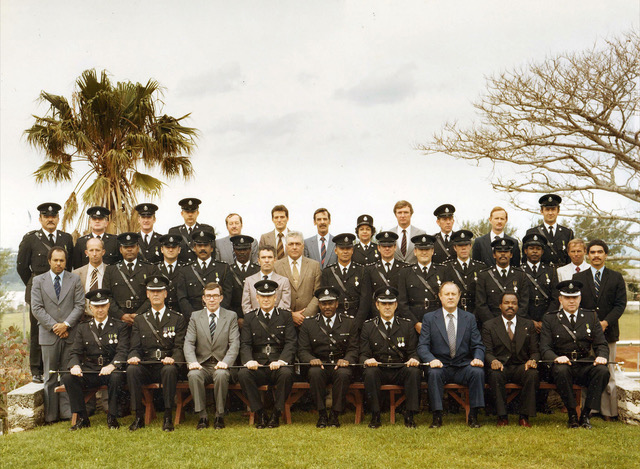 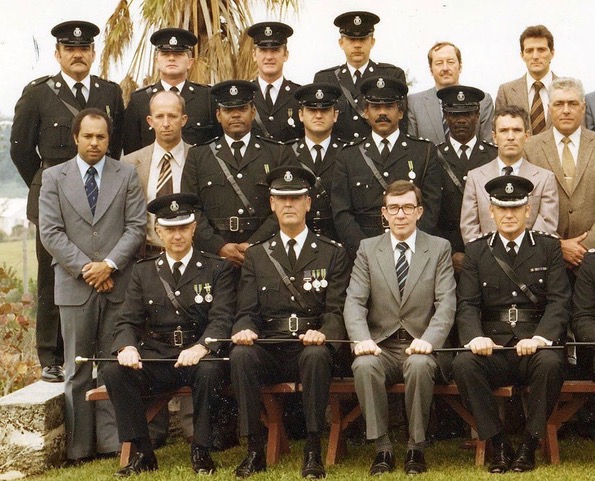 Davie Kerr 2 years 10 months
Without wishing to be unduly picky, in the interests of historical accuracy it was actually Jeff Sanders rather than Geoff.Editors note - Davie, please continue to be 'picky'. Much prefer to have accuracy.

terry 4 years 4 months
JCP was still there in 1981.Shalom.Editors note - Many thanks for confirming that Terry. Our records clearly show that JCP retiredin 1985.

Glynis nolan 4 years 4 months
I am sure this photo was not taken in1981, unless JCP Hanlon was in BDA on holiday, as he left in the seventies before I left in 1980.Editors note - Are you sure about that Glynis? Our records show that JCP Hanlon served from February 1952 until February 1985. In fact his personnel file in the Police Register records that he was promoted to ACOP on 1st December 1981. Three reasons for narrowing the date down to late 1981 are (1) Barry Smith was not promoted to Inspector until August 1981 (he is in the photo); (2) Nobby Clark retired as of 21st October 1981 when COP Frederick "Penny" Bean took over; and (3) George Rose has a copy of the photo which is dated 1981.

terry 4 years 4 months
Me thinks your dates are wrong. But then again how would I know.Editors note - You're absolutely right Terry. We could be wrong. Let us know exactly what it is that makes you think the date (late 1981) is wrong. At this point I'm purely going on police records and other people's collective memories. Please see reply to Glynis re the current reasons for saying late 1981.

Davie Kerr 4 years 4 months
Re the comment about Nobby's last promotion, I should maybe add that it was on a most appropriate date: April 1st!Editors note - I seem to recall that George himself thought the date of his promotion to Sergeant was most appropriate!

With regard to the olde Sunbeam, was it Alan 'Happy Harry' Lister who was designated to drive the car at Nobby's farewell and it wouldn't start, so 'All hands on deck' as it was pushed along past the PRC?

Good point Phil.Thing is I remember vividly John Instone as driver and when he opened the door for Nobby to get in, the car started spitting and sputting and throwing out huge clouds of white smoke.Gives a new meaning to driving out in a cloud of smoke.Litteraly.

terry 4 years 4 months
Editors note - Thanks Terry. Can you also recall who Nobby promoted as one of his last official actions before handing over the reins to Commissioner Bean.Yes I can but please don't rushe me.Editors note - Spot on!

terry 4 years 4 months
Sounds like it was definitely 1981, but could have been taken a few months before Nobby's official retirement, especially if he took pre-retirement leave.. I believe the earliest in could be is August 1981 which is when Barry Smith was promoted to Inspector.I remember when Nobby retired as I was in admin and John Instone drove up in the old Sunbeam Talbot and he was wisked away; great moment.Penny Bean was the Commissioner they day because when JCP walked in and looked in his tray I stood and said ATTENTION as Penny walked in behind him.That's a fact.Editors note - Thanks Terry. Can you also recall who Nobby promoted as one of his last official actions before handing over the reins to Commissioner Bean.

Hola, senior officer missing, I think (at the time ) was CI Campbell Simons.

Maybe Campbell had not been promoted that week.But back to my original post of Senior Officer.Great day guys.Editors note - It's difficult to establish the exact date on which this photo of Senior Officers was taken, Terry, you asked the question as to which senior officer is missing. Campbell is one who is definitely missing. Did you have anyone else in mind?

Never said Dave O' was wrong.The date of promotion have nothing to do with the photo and those that are absent.Happy fall.Editors note - Surely their date of promotion is relevant if they havn't yet been promoted, unless they are serving as Acting Inspector and have been invited to be in the photo.