We had just recently received these photos of a gathering of our colleagues held quite some time ago.   We wanted to know where and when this gathering was held,  who attended, and perhaps where are they now?

We also requested that if you happen to have more photos of this get-together please send them to us by email at  or to me personally.

The event was a reunion for ex-Bermuda police officers organized by Ian Graham and Bob Kinnon back in 1983 and held in York.  Trying to correctly identify everyone in the photos has proved to be a nightmare, partly because this bunch had no idea of how to line-up in straight lines, and in some cases we can't see their faces,  but we've received excellent input from Mike Caulkett who had previously sent us a second photo (see below). Mike may have taken the first photo because he appears in the second photo just below the young lady who has so far remained unidentified.  Davie Kerr also provided many of the names even though he wasn't even there!  Bonus points for Davie.

We know for sure that Roger Brydon attended becauase he appears in a separate photo with Bob Kinnon.  We also know for sure that Mike Burke attended because he read out a letter from the Commissioner of Police, and also Jim Lyons.  We have no idea of the identity of the guy in a light jacket and dark tie standing just to the left of Chris Muspratt.

I should add that we also don't have any contact information for many of the attendees, and I will try to compile a list of all those not on our  list and ask those of you who are to let us have their details so we can touch base with them.

I would also urge those of you who have not been in touch with us to write and let us know a little about where you are and what you are doing these days, along with a fairly recent photo of you and maybe your family.  All it needs is a few lines for our "Keeping in Touch" column, or you can write a more in-depth article for our "Then and Now" column.

Have tried to list as many names as possible in the captions below the main photos but please feel free to let us know where we have made mistakes or missed you out. 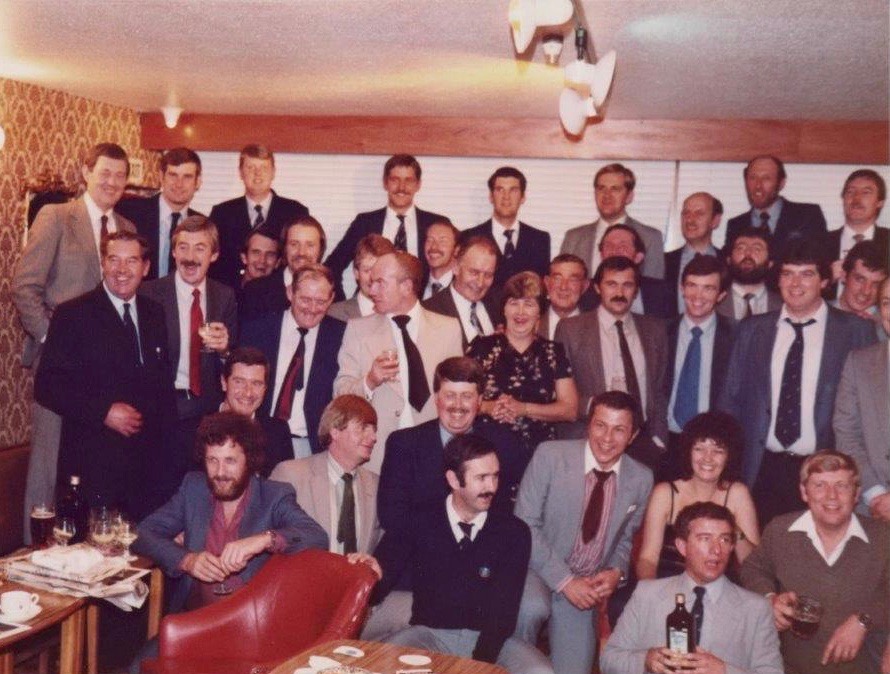 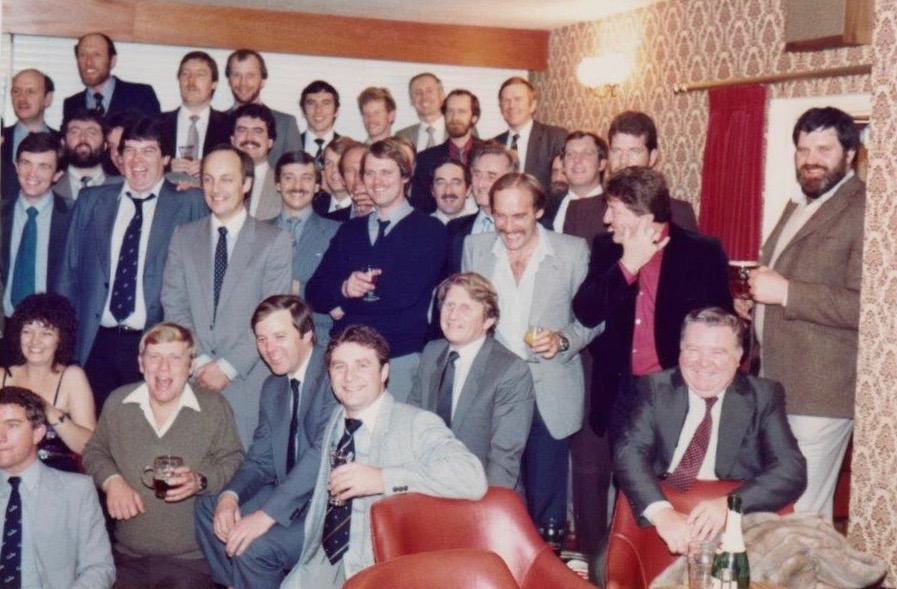 After posting these two photos which looked vaguely familiar,  I checked our ExPo photo files and found this one taken at the same time, and this one includes Mike Caulkett sitting at front and centre. It may help you to identify all those present who all seem to be having a great time.  If you were there please tell us more about it. 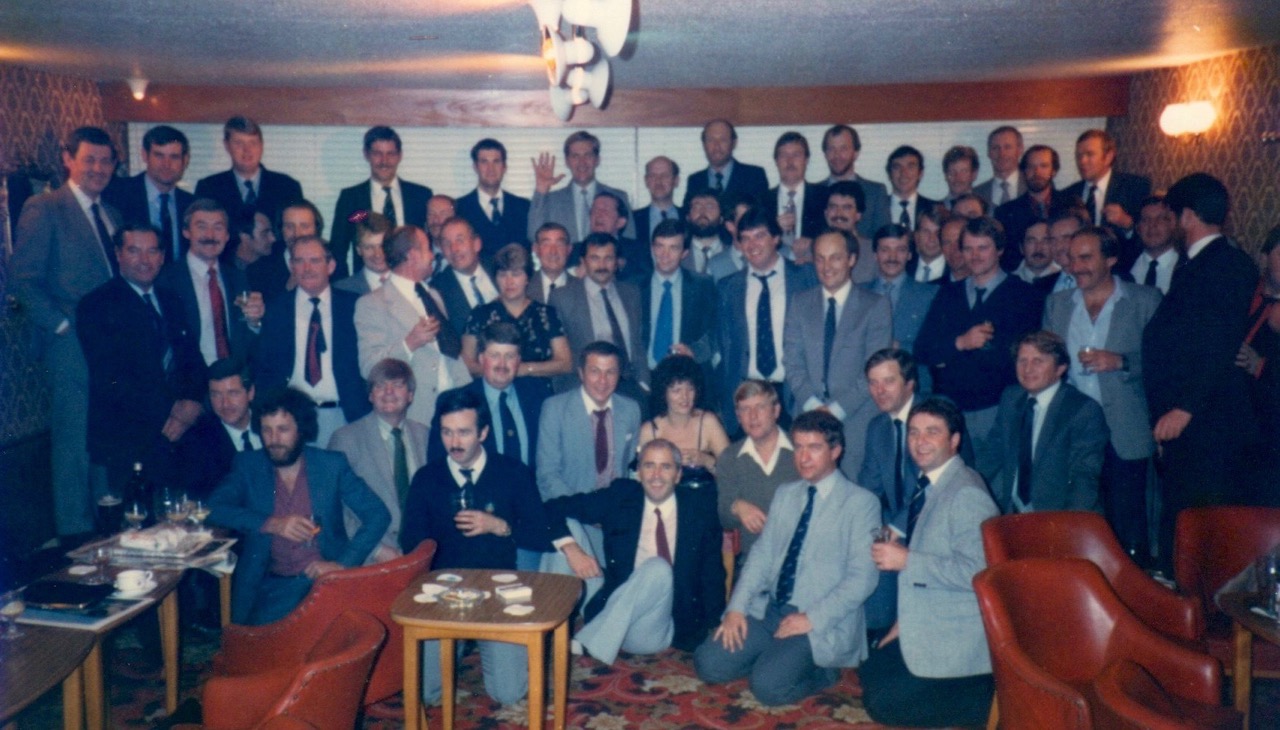 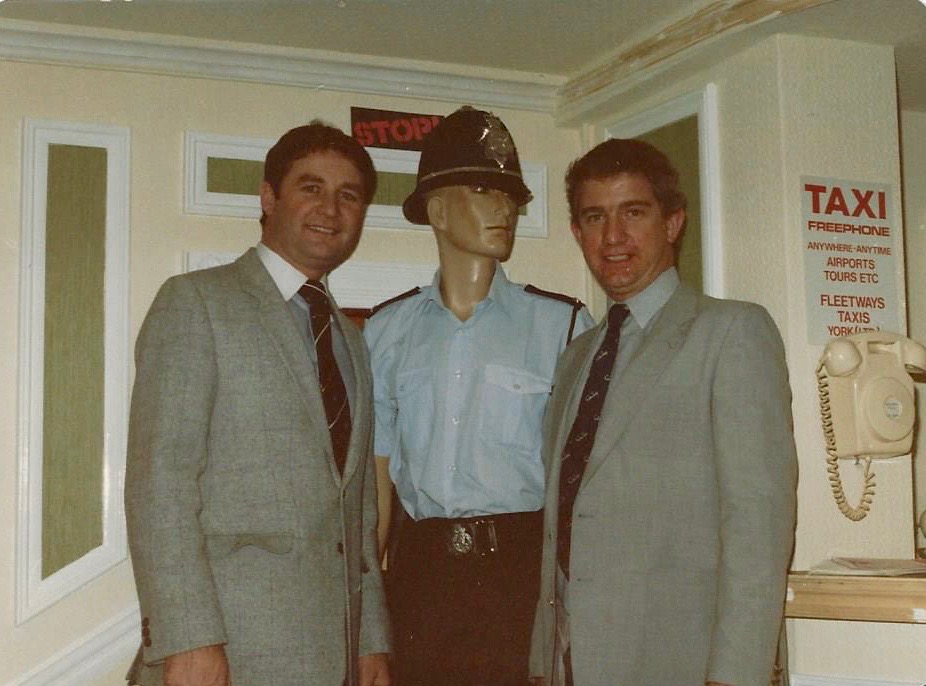 IAN GRAHAM AND BOB KINNON  -   We have now heard from both Ian Graham and Bob Kinnon who organized this reunion in York and both agree that it was very well attended as can be seen from the photos.
Bob says it was held at the Newington Hotel in York, although Ian remembers that they were so many attendees they had to call on 3 nearby hotels for extra accommodation.
Ian recalls that,  “Most  people stayed two nights as many were travelling a distance. The hotel owner made sure the ingredients for Dark and Stormies were behind the bar.
Paul Davies complained, tongue in cheek, that he had to share a room with Peter Blogg (since deceased). Mike Burke came from Jersey to attend the reunion, and he  read out a letter from the then Commissioner of Police in Bermuda.
We had a raffle for prizes which included Birdsey prints and bottles of Black Seal Rum.
It was a great reunion. “
MIKE CAULKETT writes:-
“I travelled up to this reunion with my good friend Tom Barnes, sadly no longer with us, and Tony Watson of whom I have heard nothing for several years now. Would have thought he was the sort of person who would have enjoyed the expobermuda.com website.
As the reunion was arranged by Bob and Ian, who both arrived in Bermuda after I left in 1970, most of those attending this reunion were contempories of Bob and Ian and were unknown to me.
I think that the enlarged split photo without me in it were taken by me on my camera but not sure who took the one with me in it, obviously not me!!
I have done my best to name those of my era and place them in the photos. I will start on the extreme left and roughly move right. All positions are as you look at the photo.
Kevin McCarthy – standing extreme left.
Allan Wilkinson – in front and slightly to right of Kevin
Syd Gordon – standing to the right of Allan with moustache
Dave Barber? – kneeling in light suit behind chap with full beard. Based this on hairstyle mainly. Probably not Dave.
Christine Muspratt – centre of picture.
Sean Sheehan – head and shoulders to left of Christine
Bill Sherwood – Just his face to right of Christine
I know very well the two people standing to the left of Christine but just can’t name them. One in very light suit and chap to the left of him.
Me - Mike Caulkett – seated in centre front of one photo in light trousers and dark jacket with knee up
Tom Barnes – kneeling to the right of me in V neck jumper and open neck shirt
John Napier – standing behind Tom in grey suit
Bill Pritchard – in suit sitting to right of Tom
Tony Watson – low down to the right of Bill Pritchard and directly in front of Bill Buchanan
Bill Buchanan – standing with drink in hand in light blue jacket and wide open neck shirt
Les Brown – third from the right in top right corner of photo
Roger Needham – standing partially hidden in right hand enlarged photo behind chap with pink shirt and dark jacket.
John Cafferkey – broad smile in bottom right corner of right hand enlarged photo
Mike Parris – black hair and beard standing with beer in the extreme right side of enlarged photo.
I recall chatting with Jim Lyons at this reunion but can’t see him in any of the photos.
Best wishes to all
Mike
Extra Photos provided by Ian Graham 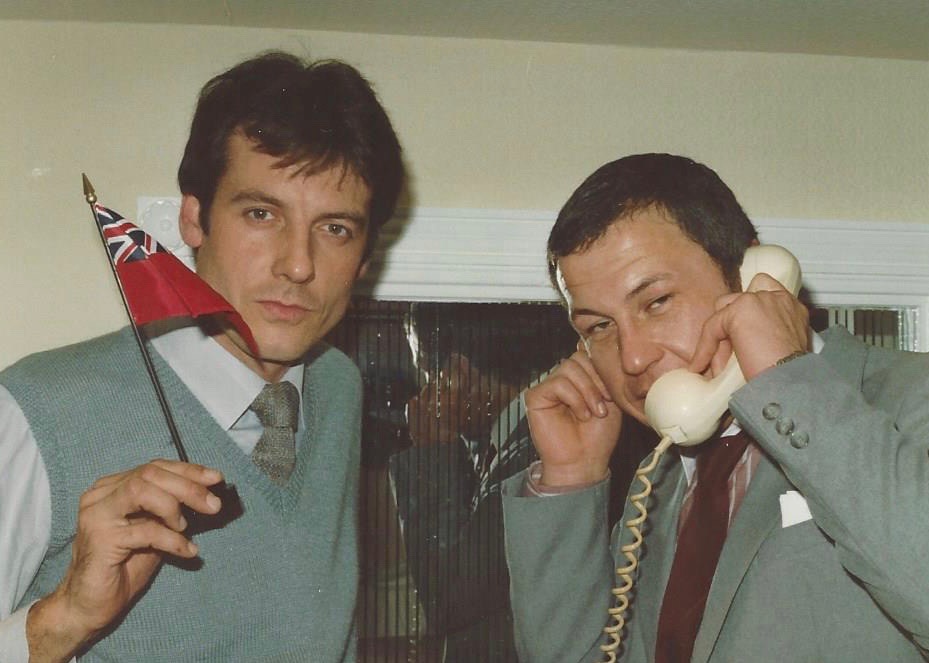 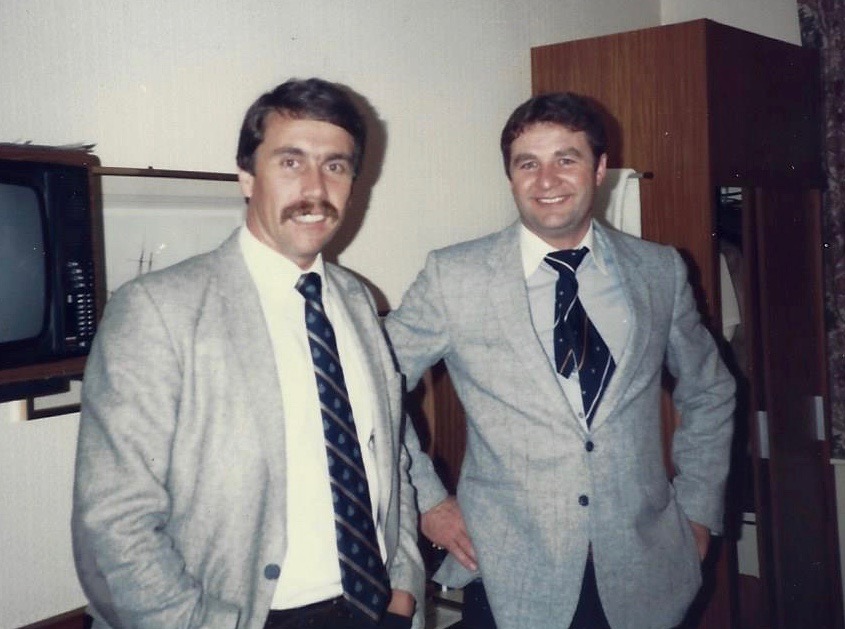 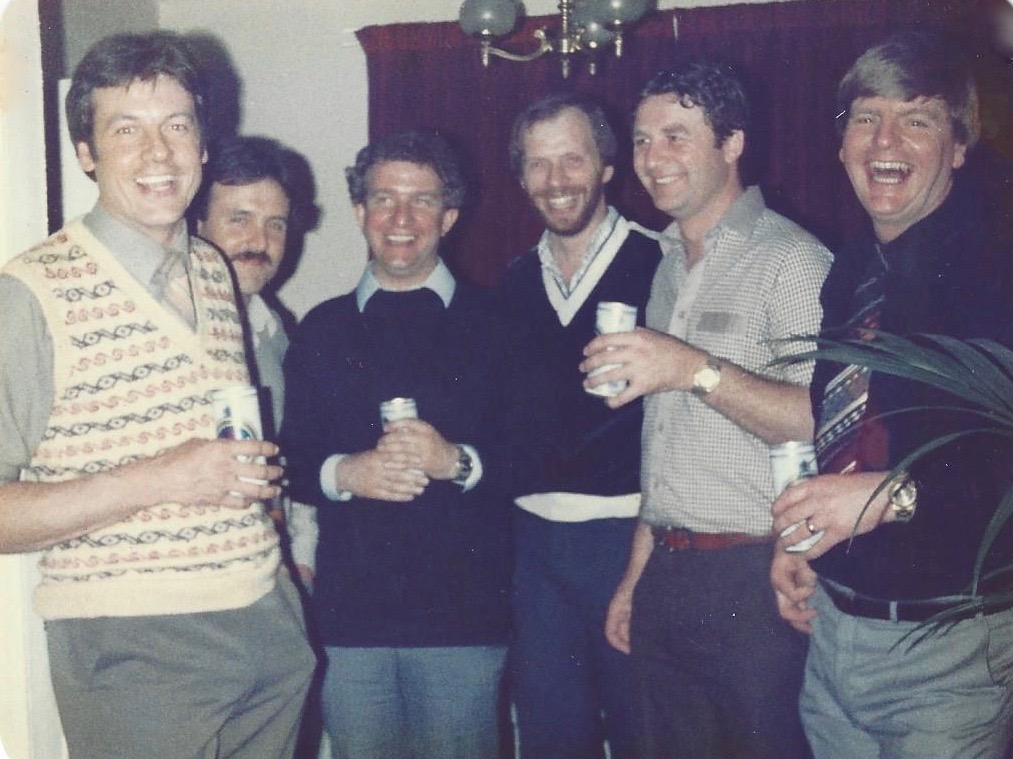 Terry 5 years 11 months
Between Mike Chitty and Swan is Martin Bowe.Shalom.Editors note - Many thanks Terry. Have made the change.

Terry 5 years 11 months
I'll name whom I can. I already have done with 80% by just having others confirm my thoughts.As I stated I worked with everyone of them at some stage or associated with them. Not trying to make a record but I did see them come and see them go and they all were a good bunch.I'm not into "?" like some others. Like John Joe told me in 1974 "If you don't know lad just say you don't know". Still rings true today.As an aside if anyone knows the status of Leslie Pearson I would appreciate it as he was the best friend I had until something happened.And no I do not need another comment on asking others who moved to Canada to chime in or approach them.Shalom.

Terry 5 years 11 months
Glad a few took part in mapping a course towards whom these chaps all are.I knew them all without exception.I wish more had chimed in as to whom they are or were.It's good for the soul and also creates dialogue and can at times re-new friendships.We get older and our feelings and emotions change.Thanks for the thyme.It's been a good run.Shalom.Editors note - Will try to attach names to faces from the information received so far, then perhaps we can get you to name those we havn't been able to ID.

Terry 6 years
Martin Bowe above the guy with beard on the lower left.Shalom.

Frank Church 3rd from left above Pete Swann.....Editors noto - Not sure about this one Terry. I think you probably mean Fred Church but I don't see him above the man I think is Pete Swann. I believe the man 2nd from left above Pete as Alf Hagar and the man next to him slightly behind is probably Bruce Bingley. Will wait for more input then try to put together as many names as we have.

It's definitely Bruce as you say. And you right about Frank I knew it was a church though........It will take a collective effort to get all these names right. Every little helps.

Terry 6 years
Frank Church 3rd from left above Pete Swann.....Editors noto - Not sure about this one Terry. I think you probably mean Fred Church but I don't see him above the man I think is Pete Swann. I believe the man 2nd from left above Pete as Alf Hagar and the man next to him slightly behind is probably Bruce Bingley. Will wait for more input then try to put together as many names as we have.

Davie Kerr 6 years
My big computer's in dry dock at the moment so I'm operating from a tablet which doesn't let me expand the photos much, but I can help with the two guys front and centre of pic 1: the one with black hair and droopy little black tash is Frank Thom, and the chubby one immediately behind him is the late Andy Donaldson who was tragically killed in a car smash back in '93 on the notorious A9 in Scotland. I don't know what Frank did after leaving Bermuda, but Andy joined Northern Constabulary in Scotland and was serving with them at the time of his death, which was apparently caused by an American driving his car on the wrong side of the road and hitting Andy head on. I have this on good authority from retired Sgt Dave Conner of that force, who was one of Andy's best mates.Editors note - Great to hear from Davie. Have been worried about not hearing from you. Very sorry to hear about Andy Donaldson. Maybe we can do a brief write up about him here on the website.